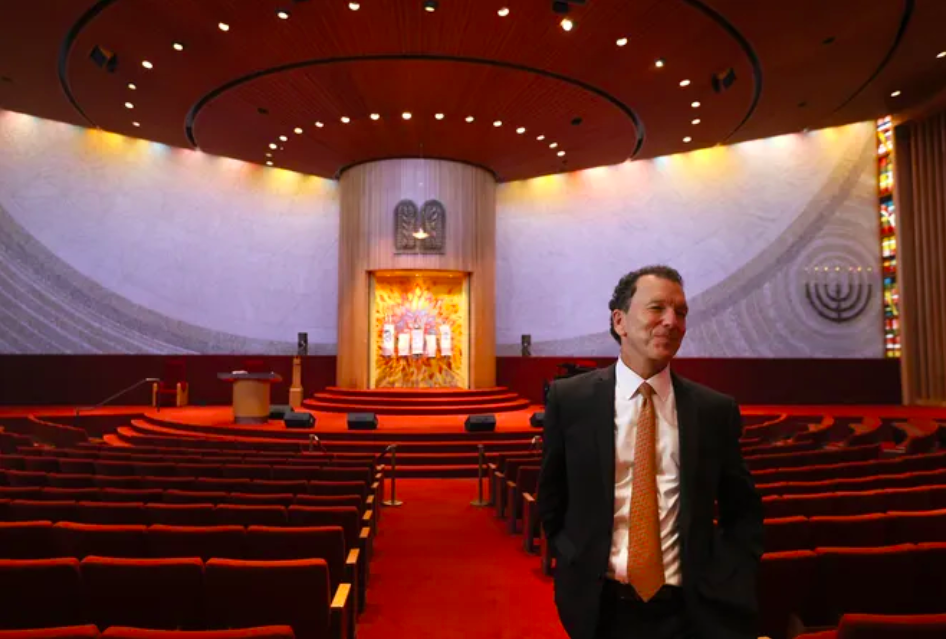 The sanctuary at Temple Israel is built in a semicircle, with the ark containing the Torah scrolls in the center, built to resemble a tree trunk “in the center of the world.”

It’s in a semicircle intentionally, because one of the oldest teachings of Judaism is that prayer has to lead to action, and the other half — the half that’s not made up of chairs and places to sit — represents the community.

“That recognition of the other half of the circle has been the driving force of my rabbinate, because it’s never been about me, it’s been about us,” says Rabbi Micah Greenstein. “The other half of the circle being the world beyond these walls. The mission of Temple has always been to be a force for good for the Jewish people and all people, because one God means one humanity.”

Greenstein has served at Temple Israel for 30 years since he was hired as the congregation’s assistant rabbi. He stands on the shoulders of just seven other rabbis, dating back 167 years into the congregation’s rich history in Memphis.

“The history of this city and this synagogue are intertwined, and that’s so humbling,” Greenstein said.

Currently, Temple Israel is made up of about 1,400 households, or about 4,000 people. There is no city in the United States or Canada with a synagogue this large and a Jewish community this small, with only about 10,000 Jews in Memphis.

But it was with just 36 families that the congregation was formed, when it officially came into being on March 2, 1854 when the Tennessee Legislature granted a charter of incorporation to The Congregation of the Children of Israel (also known as B’nai Israel) “for the purpose of establishing in the city of Memphis a church for the worship of Almighty God according to the rites and reed of the Hebrew sect,” according to the book “The Story of Temple Israel” by Judy Ringel.

Over the years, Temple Israel — as the congregation was renamed in 1943 — played a central part in much of Memphis’ history. Prominent members of the congregation were there through yellow fever in Memphis. They spoke out against lynchings and the Ku Klux Klan in the 1900s and served during World War II. And it was Rabbi James Wax, then the president of the Memphis Ministers Association, who confronted Memphis Mayor Henry Loeb the day after the Rev. Martin Luther King Jr. was murdered.

“I think if you’re not Jewish, particularly in the Christian community, I don’t think people fully understand the power Temple Israel has played in Memphis for the last 100 years,” said Dr. Scott Morris, CEO of Church Health, who has known Greenstein for the past 30 years. “The membership of Temple from both a business side of things, political leadership to moral leadership, Temple is always at the heart of things that are happening in Memphis.”

And for the past 30 years, Greenstein has been one of those people who’s led Temple Israel in wielding that influence, Morris said.

“I’d think Micah’s one of the first people anyone would think about to say how can we move forward Memphis to make Memphis a better place,” Morris said. “His voice is usually one of the first ones that’s heard and that people listen to.”

His voice is usually one of the first ones that’s heard and that people listen to.

That leadership showed when there were murders in Binghampton 10 years ago and Greenstein called people together to “not just focus on the fear but to find a way for us as a community to lock arms and realize we’re all in this together” and after 9/11, when Jews, Christians and Muslims stood together, Morris said.

“He has incredible vision,” she said. “He’s been dedicated. He makes everyone feel important and he’s done so much for Temple Israel and the Jewish community, but he’s also done so much for the Memphis community. Temple Israel is also so highly regarded not just here in Memphis but around the country and a lot of that has to do with Rabbi Greenstein.”

When he had just graduated divinity school, there were other cities he was considering moving to with much larger Jewish populations, but Greenstein was so inspired by Wax, who had just passed away, and Temple Israel’s Rabbi Harry Danziger that when Danziger called, he chose Temple Israel.

“Once these people and this city got inside me, there was nowhere I wanted to go, because I think there are no finer people (elsewhere),” Greenstein said.

Today, Greenstein has reached the point where he’s officiating the bat mitzvahs of girls whose mothers’ bat mitzvahs he officiated 27 years earlier.

“From the first wedding I did in the summer of ’91 to this week’s funeral and wedding on the same day, you have given me the gift of being with you and your families through it all the highs, lows, and everything in between,” he told the congregation in a ceremony to honor his 30th anniversary. “…Wither goest Temple goes not only the lifeblood of this small Jewish community, whither goest Temple goes the most involved and inclusive Jewish thread in the spiritual tapestry of the Memphis faith community.”