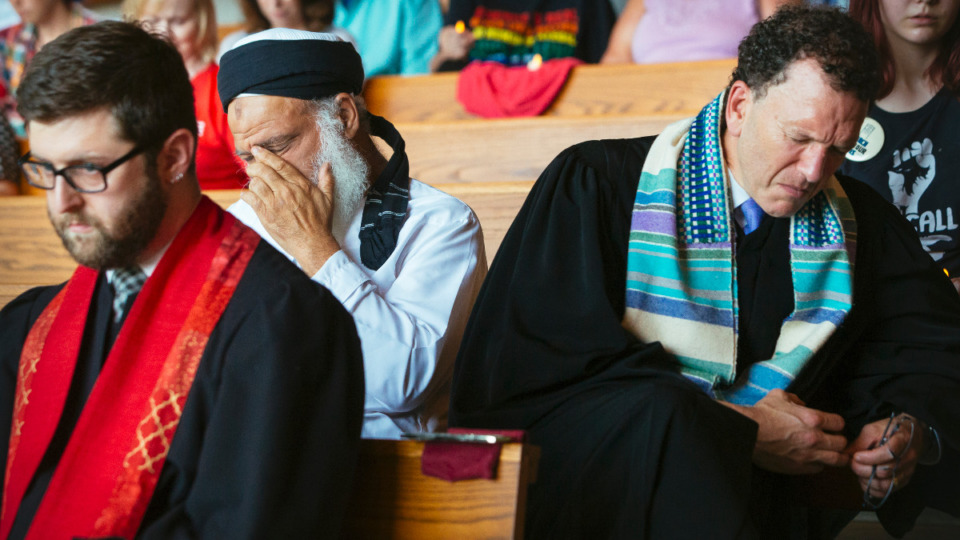 Photo(above): Reverend Sam Teitel (from left), Dr. Nabil Bayakly, and Rabbi Micah Greenstein react to the words and experiences of speaker Greg Diaz of Las Americas before prayer at Church on the River on Aug. 7, 2019. (Daily Memphian file)

This past week Temple Israel celebrated 30 years of Micah Greenstein being its Rabbi. It took a bit of arm twisting for Rabbi Greenstein to agree to having any celebration at all. It’s just not his nature to be the center of attention, but it was important to hold him up for his years of service not just to Temple Israel but to Memphis.

How many people in Memphis are recognized just by their first names? Ja, Z-Bo, Elvis — all entertainers of sorts. And then there is Rabbi Micah.

If you are involved in any effort to make Memphis a better city in which to live, you know who Rabbi Micah is.

Why has he made such a difference? I believe it’s because of his commitment to justice, his desire to see God’s goodness bloom, and his unwavering presence when there is pain in our midst and a need for a loving, comforting word. And he has been there for us day after day after day for 30 years.

When the tide COVID-19 surged into Memphis, there was Micah working with other faith leaders to have a reasoned approach to keep us all safe. When 9/11 ruptured the nation’s psyche in 2001, Micah stood with Muslim friends to demonstrate a belief that God’s love would rule the day. When people died in a mass shooting in Binghampton in 2008, Micah stood in the pulpit of Mississippi Boulevard Christian Church calling Black and white, Christians and Jews and Muslims, to comfort each other in the dark night of terror with the light of God.

Over the years I have counseled Micah that he didn’t have to accept every Christian church’s invitation to speak or be present at every ecumenical prayer service. There is only one of him, and it’s exhausting to work sunup to sundown every day. But he has never listened to me. He believes it’s his calling to make sure people know that Judaism stands with the poor and the dispossessed and that the God of us all loves the city called Memphis.

For 30 years Micah has been the spiritual leader to one of the largest Reform Jewish synagogues in the country. He has done hundreds of weddings, funerals, bar and bat mitzvahs, and baby namings. He has led dozens of trips to Israel. I have been with him twice myself. Of course everyone wants Micah to be the one there, and he has never let his congregation down.

What makes Micah special, beside his gift for words, is that he understands the meaning of commitment. Abraham Lincoln once said, “Commitment is what transforms a promise into reality.” Promises are easy to make. Just ask any football or basketball coach about an athlete who promises to come to the University of Memphis. It isn’t until the athlete signs the commitment letter that the promise means anything. In a marriage, people make a commitment “until death do we part,” yet 50% of marriages end in divorce. Micah is special because his commitment has been unwavering.

Thankfully, Micah’s wife, Sheril, and their three children have been willing to ride along with him on this magnificent journey.

I am not saying Micah is perfect, but I am saying he has the qualities that make for a saint. His resolve to listen to what God calls him to do and then to follow through on what he hears, despite the hardships of the day, reminds us what it means to be close to God and live out the virtues that come from that closeness. And that’s what it means to be a saint.

His resolve to listen to what God calls him to do and then to follow through on what he hears, despite the hardships of the day, reminds us what it means to be close to God and live out the virtues that come from that closeness.

I am holding Micah up because in these days many of us struggle to know how to handle all the anger and strife we listen to every day. We seem to have few heroes, and those we do have are picked at until they bleed. We need to be proud of those in our midst who have the courage to stand up for what they believe is right and to call others of us along on the journey — and do it consistently over a long period of time. I think 30 years is an impressive amount of time.

I hope I am not speaking just for myself when I thank Rabbi Greenstein for being who he is. It really isn’t for what he has done, because I don’t think he would know how to be anyone else. But Memphis is a better place for having known him. Of that I am certain.