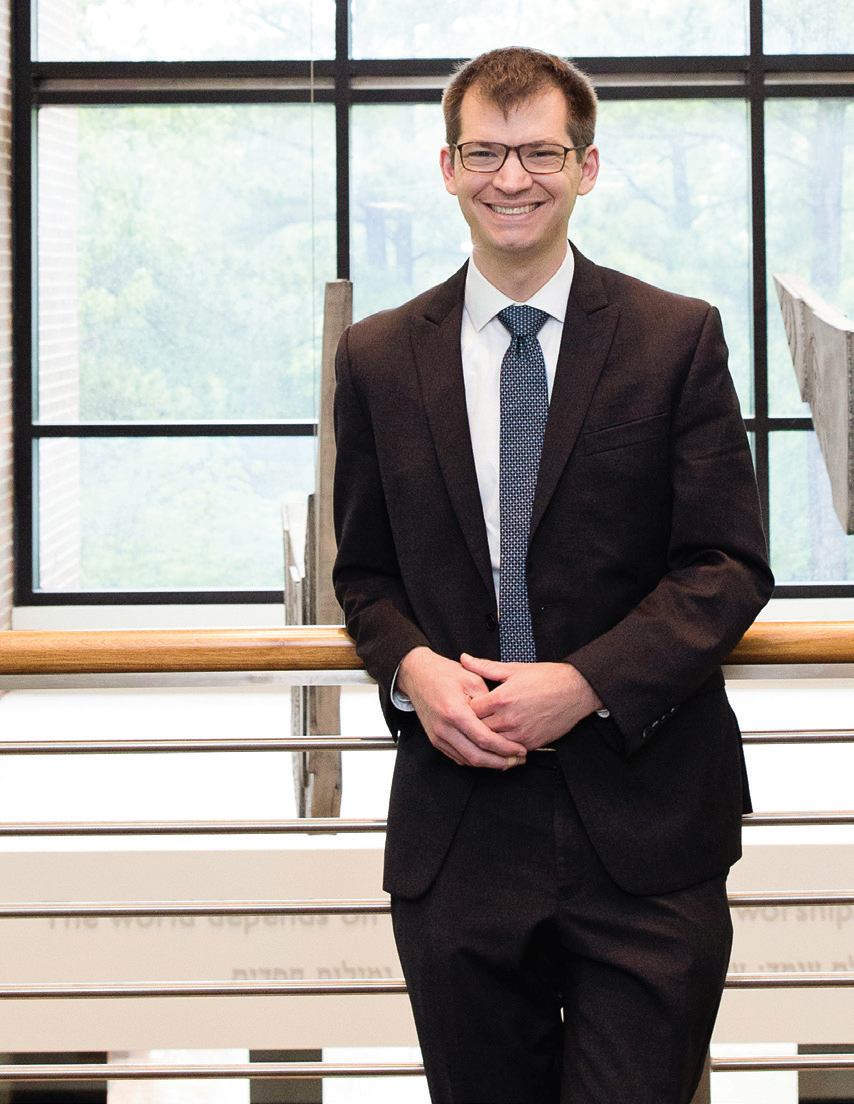 Rabbi Jeremy Simons didn’t plan on becoming a Rabbi. Born in Providence, Rhode Island, he moved frequently during his childhood due to his father’s work in the restaurant industry. His family left Providence for a suburb of Boston and then moved to Nashville when Jeremy was in 5th grade. In 8th grade, they moved to Columbus, Ohio, where he attended Worthington Kilbourne High School. His plan was to become a lawyer, and he went so far as to take the LSAT and make a deposit to a law school. But at the end of his last semester of undergraduate studies at The Ohio State University, an unexpected conversation made him think twice.

He had been teaching religious school, and while clearing out his classroom on the last day of the school year, his co-teacher (a childhood friend) said to him, “It’s too bad you’re going to law school. You would have been a really good youth group advisor.” He agreed and convinced himself and his parents that deferring law school for a few years to work with youth groups was a good idea. He began applying for youth group directo jobs and ended up back in Boston. A few years turned into four, and it was during that time he realized his true calling.

“I knew then that I wanted to be part of a Jewish community,” says Rabbi Simons. “Not just a teacher, but also a learner. And what I figured out is that a rabbi is someone who teaches and someone who learns, and the fact that I could do that as a career was perfect for me.” He began preparing for rabbinical school and the rest is history. But as it turns out, not going to law school wouldn’t keep him out of the courtroom.

In 2014, Rabbi Simons graduated from the Hebrew Union College (HUC) and had taken a job as the Director of the Rabbinic Department of the Goldring/Woldenberg Institute of Southern Jewish Life (ISJL) in Jackson, Mississippi. It was his position at ISJL that brought him to testify in court against Mississippi House Bill 1523 (also known as the Religious Freedom Bill) which had been rushed to the legislature and signed by the governor, according to Simons.

The bill was designed to protect local businesses and government entities, allowing them to claim religious liberty in discriminatory practices. More specifically, services could legally be denied to LGBTQ+ individuals and others based on three religious beliefs that were considered widely-held across major religions. “Those three positions were that marriage is between a man and a woman, sexual relations should only take place within such a marriage, and that gender is assigned at birth and not changeable,” says Simons, who was brought in by a New York group that was challenging the bill.

“The State’s justification was that (the bill) didn’t just protect one religion, but was one of broad religious protections. The way to counter that was to bring people on the stand who identified as religious to say, ‘Those are not my religious practices,’” says Simons. “I was honored to be asked to testify and speak to the religious traditions in Judaism, and say that these are not my religious beliefs or those of the Reform Movement.”

A few years earlier, the Reform Movement had unanimously passed an inclusion resolution affirming transgender recognition within synagogues and camps. “I felt I could speak very confidently in saying not only are these not our religious beliefs, but we are in fact on the record strongly opposed to these types of ideals.” While the judge ultimately ruled against the passage of the bill, the decision was eventually overturned on appeal.

If you’ve had occasion to speak with Rabbi Simons, you’re familiar with his reserved yet welcoming demeanor. Perhaps it’s because he has moved so frequently that he has learned to make himself feel at home, wherever home happens to be. Upon moving from Los Angeles to Jackson to work for the ISJL (he’d just graduated from Hebrew Union College in LA) Rabbi Simons went from living in a place where his immediate neighborhood had more Jews in it than the entire state of Mississippi to serving smalltown, Southern Jews whose roots went back three, four, and five generations.

“I think what I came away with after three years was an appreciation for the dedication of Jews in small-town areas like Jackson. It’s easy for Jews in other parts of the country that have larger populations to say, ‘You can’t really be Jewish in a place like that,’ and it is true that there are a lot fewer opportunities. You don’t have the infrastructure.

“On the other hand, these places where people had to drive two, three, or four hours to pick up matzah for Passover…you’re going to tell me that they’re not committed to Judaism? That you’re more committed just because you live in a city with all of these communal resources versus someone who has to work every day to preserve their Judaism and does for generations? It changed my perspective on what it means to be a committed Jew.”

Following his work with the ISJL, Rabbi Simons accepted a two-year term as the Director o the Hillels of Rhodes College and the University of Memphis. Helping Rhodes establish a Hillel was especially meaningful. “Hearing from Jews in the Memphis community, and hearing from alumni of Rhodes in particular who never imagined there would be a Jewish community there – and to know that I got to be a part of it – that’s powerful.” It also didn’t hurt that taking the job meant he and his now wife, Rabbi Bess Wohlner, would be living in the same city.

We know how their story ends, but how didtheir romance begin? “That depends on who you ask,” says Rabbi Simons. “Technically, we probably met at a NFTY event at a summer camp in Indiana. We were both there at the same time during high school, but we don’t remember meeting.” In 2007, he recalls that they definitely met at a youth professional seminar before the Reform biennial conference.

“We were in the same break-out group with six or so other people, and we didn’t quite click right away,” says Rabbi Simons. “But then we found out we were going to rabbinical school together a year or two later, and the rest is history.”

Last month, Rabbi Simons officially joined Temple Israel as its newest Assistant Rabbi. Rabbi Bess Wohlner was recently elevated to Associate Rabbi, and the couple looks forward to working together in serving the Temple community. In addition to leading the congregation from the pulpit, Rabbi Simons will direct the high school programming for grades eight through twelve, which includes the Sunday afternoon class program, and other elements like the madrichim program and MeFTY youth group.

“The most impactful Jewish experiences I had as a young person were through a congregation and I’ve always felt very connected to synagogues,” says Rabbi Simons. “The chance to be a congregational rabbi is very exciting for me, and to be enmeshed in one community that grows over time.”

Rabbi Simons is also looking forward to engaging with youth programming in his new role at Temple. “I’m really excited to be part of the teen community and to help build and strengthen the community of young people that we have. I’m inheriting a phenomenal program and just looking at the numbers of how many teens are engaged in our high school versus what averages are in other synagogues, it’s really remarkable what we have.”

Thinking back to his own time in high school, Rabbi Simons recalled his time working on the school newspaper. Not sure if anyone would respond, he put out some feelers to see if anyone who identified as LGBTQ would be willing to share their story. In a school of about 1600 students, where Rabbi Simons recalls no one was “out,” one came forward. “I think it started my own personal activation of realizing how to be a good ally and how important it was to give anyone who is in a marginalized community a voice, and I think that does tie directly back to Judaism,” says Rabbi Simons.

“Jews have been in the margins of society, with some exceptions, but we are now blessed to be in a position of comfort and success in this country. Not all Jews, of course, but as a community, Jews have found a home in America. And I think that many of us realize we have a chance for our voices to be heard. Now that we have representation, we have the ability to affect the lives of others, and not only can we, but we should, we have to – it’s our obligation.”

When asked about proposed legislation in Tennessee that would allow adoption agencies to deny same-sex couples the right to adopt, Rabbi Simons responded with a call to action. “I think it’s a reminder that it was tempting to declare victory after the Supreme Court case legalizing gay marriage and think ‘This is over now, we can move on and take up other issues,’ but these battles are far from over, and we have to be careful not to be complacent or to have this false sense of complacency that the laws in place now will protect people. As a Jewish community and as allies, we have to keep fighting this.”